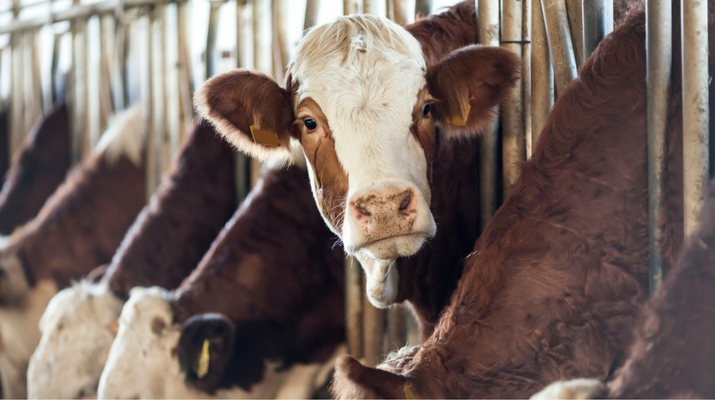 It was during that time period that the book Skinny Bitch was all the rage.  I had just read Skinny Bitch – which had cited to a book called Slaughterhouse [1] in the section designed to convince people not to eat meat.  I grew up in the Midwest.  I was pretty sure that no matter what I read – I was not going to stop eating meat.  I was wrong.

I ordered Slaughterhouse from Amazon and it arrived the next day – just as I was leaving on a business trip to Philadelphia.  I threw it in my briefcase and pulled it out later on the plane.  I couldn’t stop reading it.  I was mesmerized by the truths uncovered and exposed by a reporter who wouldn’t give up.

It was by birthday.  By the time my flight landed in Philadelphia, I was a thirty-five-year-old vegetarian.  I remained a vegetarian for eight years.

Slaughterhouse described what is supposed to occur (according to the law) at meat-processing plants versus what was actually happening across the United States.  The law governing the slaughter of animals is the Humane Methods of Slaughter Act (HSA) which that was passed by Congress in 1958 and broadened in 1978.  The United States Department of Agriculture (USDA) is charged with enforcing the HSA, however there is no true penalty for a violation.  In the event the USDA employee witnesses a violation of the HSA, he or she has the authority to temporarily suspend operations at the plant until the violations are corrected.[2]  But since the USDA employees are often closely allied with the meat industry, they are the proverbial fox guarding the hen house.

As reported by Slaughterhouse, the result is not only the inhumane treatment of animals, but filthy conditions in the plants.  Animals are often skinned and dismantled while they are still alive or dropped into scald tanks where they are boiled to death while they drown.  Slaughterhouse workers universally complained about the unsafe working conditions, as animals are frequently strung up while they are literally kicking and screaming.  But, honestly, it wasn’t just the cruelty that struck me – what also struck me is that meat slaughtered under these conditions is dangerous, even deadly.

According to the CDC, foodborne illness is one of the nation’s most preventable public health hazards.  Yet, food poisoning deaths have climbed dramatically since the USDA began relaxing meat inspection procedures and standards in the 1980’s.  During the Regan and Bush years, the meat packing industry became increasingly consolidated and line speeds skyrocketed –  so did the number of cases of foodborne illness.  USDA workers explain that while they are responsible for maintaining the quality of the meat (removing blood clots, puss, infection, feces) because the line speed is so fast, they are often unable to even inspect a very large portion of the meat, let alone clean it properly.

As a result, deaths from foodborne illness have more than quadrupled during the decade of deregulation from about two thousand in 1984 to roughly nine thousand in 1994.  The CDC estimates that there are now about 40,000 cases of E.coli poisoning every year.

E.coli is a bacteria that grows in the intestines of cattle and other animals.  In fact, the only natural reservoir of E.coli 0157:H7 has been proven to be the intestinal tract of cattle.[3]  This is a disease that was extremely rare in the 1980’s and now is the leading cause of kidney failure in U.S. children.  When feces gets onto the meat during the slaughtering process, and then meat isn’t cooked enough to kill the bacteria, E.coli infection results.

E.coli is most common in ground beef, where the feces isn’t on the outside of the meat (and likely to get washed off or cooked thoroughly) but ground into the meat and is present throughout.  In 1993, more than seven hundred people got sick enough to need medical care after eating undercooked ground beef.  Disgustingly, and despite the fact that more people than ever before are dying from E.coli exposure, the USDA has established levels for allowable fecal contamination on meat.  E.coli often makes adults very sick, but it can (and often does) kill children.  After I read this, I decided that my children were not permitted to eat ground beef.  My older daughter had her first hamburger in the fifth grade and then only when it was booked at home.

Another food borne illness that results from unsafe slaughtering practices is salmonella.   Salmonella is also bacteria that lives in the intestinal tract of animals, including birds.  Salmonella bacteria are usually transmitted to humans by eating food contaminated with animal feces.  Again, like with E.coli, if you don’t cook the meat enough to kill the bacteria, you can become infected.

So, as a country, we are getting sick from meat because we are literally eating shit.

The good news is, as a result of books like Slaughterhouse, the country is more aware of these problems and has demanded alternatives.  If you are like me, you are not only concerned about the way animals are treated, but about what you are eating and feeding your family.  The easiest way to address both of these issues is to buy your meat from your local butcher.  A small, independent operation that only slaughters a few animals a day or even a week, often takes time to handle the animal with care and precision.

If you don’t have access to a local butcher, buy your meat from a farm that is transparent about their process.  There are several humane farms whose eggs, poultry and meat are available at national food markets, like Whole Foods.  You’ll want to look for farms who have joined the 5-step Animal Welfare Rating Standards Program with Global Animal Partnership, which requires farms to raise animals in pastures rather than feed lots – at the very least the animals must be permitted access to the outside.  But you’ll also need to make sure the animals are also slaughtered in a similar, nurturing environment that takes care to keep the process clean and humane.  If you are concerned about clean meat – you cannot purchase meat where the animal was slaughtered at a traditional slaughterhouse, regardless of how the meat was raised.

One great example of a farm you are looking for – is Mary’s Chicken.  Mary’s is a family-owned farm who has a very informative website detailing the care they take in raising their poultry.  They even have a video on their website that shows the farm and slaughtering conditions.

Another great example is Fork in the Road.  The website (and company) is transparent concerning how the animals are raised and fed.  I couldn’t find any information on their website about their slaughtering process, but I did email them and ask.  (I’ll update this article when I get their response).

Finally, check out Belcampo.  Belcampo is a farm, processing plant and has several neighborhood butcher shops that provide organic and compassionately raised and slaughtered meat.  At Belcampo, they believe that the quality and flavor of their meat is directly impacted by how happy and healthy the animals are on the farm.  They take care to make sure the soil is the highest quality available and that the animals are provided a diet of high quality grasses and grains that provide the vitamins and minerals their bodies need.    This is the gold standard of what you’re looking for.

There’s a lot about our food supply that is downright scary.  But if we continue, as a society, to demand access to higher quality foods, they will be available for us and our families.

[1] Slaughterhouse is an exposé written by Gail A. Eisnitz which explores the meatpacking industry and the effects industry consolidation, increased line speeds and deregulation have had on workers, animals and consumers.  It was the first book of its kind and included interviews with slaughterhouse workers who had never before spoken publically about what is really taking place behind the closed doors of America’s slaughterhouses.  I have recently learned that Ms. Eisnitz has recently published a new book that also includes information about the ongoing efforts by the Humane Framing Association to attempt to improve the conditions in the meatpacking industry.  I urge you strongly – do not read either book unless you are prepared to not eat meat ever again because they will make you sick.

Dara is an NASM Certified Personal Trainer (CPT), NASM Fitness Nutrition Specialist (FNS), and Certified in Applied Functional Science (CAFS). She knows what it is like to train for peak performance but has also recovered from serious injury, surgery, chronic pain and life-altering illnesses and found ways to return to an active lifestyle.
What Can We Help You Find? This is the only olive oil I have found with a harvest date and a bottled date...during the reveal of the olive oil scandals, this brand was third party tested and found to be 100% olive oil...the only one I can find!