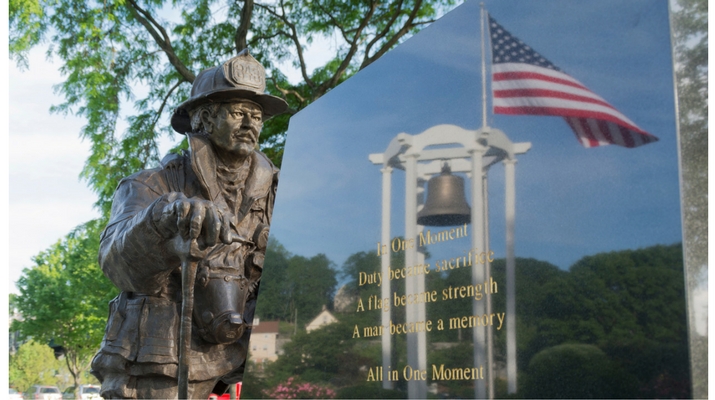 Fifteen years ago our country suffered an enormous tragedy.  The attack on the twin towers shook our entire nation.  So many lost their lives that day; many in horrific ways.  The United States cried as we watched the towers fall and New York become covered in ash, smoke, debris, and worse.

I am an Emergency Nurse.  I am proud to work alongside firemen, police officers, and paramedics.  Our first responders.  These are the men and women that rushed into those towers to try to help as many as possible.  Many of them died that day doing their job.  Died doing their job.  That is not a sentence too many people can say or even fathom.  However, these people go to their place of work every day with the knowledge that today might be that day.  On September 11, 2001, was that day for so many.

A few days after the attack, I wrote a poem to honor those who died.

I don’t taste the smoke that chokes me

Or feel the sweat pouring down my back

The world is falling down around me…

But you are in there with no way out

I don’t even know your name

But now we are forever connected

The heat of the fire grows near

It’s fingers reach for me

But I will not stop ’til I get to you

I’ve GOT to get up those stairs.

A deafening CRASH and I am….falling…

And I know this is the end…

But I died the best way I knew how…

Trying to get up those stairs.

I am a nurse who is married to a first responder.  I know that every time he leaves the house to protect the community, he might not return.  This is a risk he takes for the people he has sworn to protect.   He risks leaving me a widow and my daughter without the father she so adores.

Fifteen years ago this fear became a reality for so many wives, husbands and children.  I wanted to take a moment to honor those who did lose their lives, and to those who now live a much different life that they thought they might.

To all my brothers and sisters in blue out there…stay safe.

Nurse, stage manager, and teacher, Maya is a lover of all things beach, and Mom to one mini Ethel Merman.  She started out her career as a nurse in Labor and Delivery and over the past 25 years has worked in various units including the NICU, Recovery Room, and finally settling in the Emergency Department about 12 years ago. During the course of her career, Maya found she had a passion for women's issues involving miscarriage, infertility, and postpartum depression.  She lectures on these topics frequently with the hopes of bringing more compassionate care to those women facing these obstacles. When not working, Maya can be found enjoying a glass of wine with friends, hanging on the beach with her husband and 9-year-old daughter, or running with her beloved dog Max.